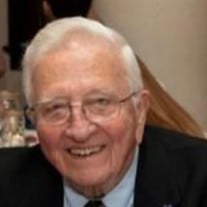 Erwin “Pete” Rump, 92, of Indianapolis, passed away April 23, 2021. He was born November 18, 1928 to the late Edward H. and Emilia (Schulenburg) Rump. Pete was a graduate of Cross Plains High School and Valparaiso University. He proudly served his country in the U.S. Army. Pete began his career in public education upon his graduation. He taught at Valparaiso High School for five years. He moved his family to the Indianapolis area in 1960 when he was employed as a teacher of Business and English at North Central High School in the Metropolitan School District of Washington Township. In 1968, Pete was appointed Assistant Business Manager for the district. In 1970, he accepted the position of Assistant to the Superintendent of the Huntington County Community School Corporation in Huntington, Indiana. In 1974 Pete returned to the Metropolitan School District of Washington Township as Assistant Superintendent for Business Services. In 1990, he accepted an appointment as a Senior Officer in the Indiana Department of Education where he served until his retirement in February 1996. During his retirement years, he continued serving schools in Indiana as a Consultant with Educational Services Company. Visitation will be Tuesday, April 27, 2021 from 5:00 p.m. until 7:00 p.m. and Wednesday, April 28, 2021 from 10:00 a.m. until the time of service at 11:00 a.m., all at Cornerstone Lutheran Church, 4850 E. Main St., Carmel, Indiana. Pete is survived by his loving wife, D. Jean Rump; daughter, Amy Watkins (Tony); sons, Kendall Rump (Lisa), David Rump, and Jon Rump (Jonnell); grandchildren, Benjamin and Joseph Rump, Erin Hausch (Micah), Luke Watkins (Nicole), Jake Watkins, Addison, Alicia, Madelyn, Gabrielle, and Nick Rump, McKenzie and Gavin Rump. He was preceded in death by two brothers and one sister. In lieu of flowers, memorial contributions may be made to Cornerstone Lutheran Church Foundation, 4850 E. Main Street, Carmel, Indiana 46033 or to Worship Anew Lutheran Ministries, 5 Martin Luther Drive, Ft. Wayne, Indiana 46825. Final care and arrangements are entrusted to Shirley Brothers Fishers-Castleton Chapel, Fishers, Indiana.

The family of Erwin "Pete" Rump created this Life Tributes page to make it easy to share your memories.

Send flowers to the Rump family.