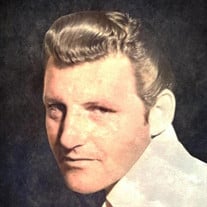 Errol Emerson Griffin, 78, of Greenfield, Indiana went home to be with our Lord and Savior Jesus Christ on Tuesday, October 12, 2021. He passed away under the compassionate care of Hamilton Trace Long Term Care in Fishers, Indiana. Errol was... View Obituary & Service Information

The family of Errol Emerson Griffin created this Life Tributes page to make it easy to share your memories.

Send flowers to the Griffin family.