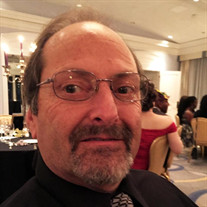 Eric Alan Schreibman Eric Alan Schreibman was born on January 5, 1962, in Detroit, Michigan to Harvey and Rose. After an eight-week battle with Covid related lung disease, Eric passed away on January 13, 2022, at 5:23 pm surrounded by loved ones. He graduated from Clarenceville High school in Livonia, Michigan and earned a full music scholarship for clarinet to the University of Michigan. After a year and a half, Eric realized that his passion was flight and enrolled at Burnside Ott in Florida to earn his pilot’s license. In his 40+ years as a pilot, he flew DC-3S, DC-9, DC-10, B-727, B-737, B-757, B-767, CE-525, and Lear jets as Captain. In addition to the many type ratings he earned in the air, in his life time he drove a taxi, a bus, an 18-wheeler, and a hearse. Eric was a driver. Eric was passionate about more than driving. He loved animals especially his (and all) dogs. They will miss his lap and their belly rubs. He loved music and movies and could quote obscure lines to the amazement and amusement/enjoyment of his friends. He most recently returned to his musical roots and began playing his clarinet again, taking private clarinet lessons at University of Indianapolis reminiscent of when he was an 11-year-old boy taking lessons at University of Michigan. With his wife and son, he joined the Shelby Community Band. Eric never lost his innate talent and skill or his profound love of music. He met and married the love of his life, Jan Hudson in 1993 and in 1998 they had their exceptional son, Ariel Lee Schreibman. They built a beautiful life in Indianapolis through music, careers, their neighborhood, and the church. Eric brought laughter and love to all who knew him and was showered with both in his all too brief life. His spirit will be missed by his family, and friends across the globe. Eric is survived by his immediate family: his wife, Jan, his son, Arie, and Taylor Cherry; his sister, Arlene Fink, and her husband Keith; his brother-in-law, Jeff Hudson, sister in law Maura Schreibman, and several nieces and nephews. He was preceded in death by his parents, Rose and Harvey, his brother, Mitchell; his in-laws, Tom and Barbara Hudson, and brother-in-law, Doug. Memorial visitation will be held at Irvington Presbyterian Church (55 Johnson Ave. Indianapolis, IN 46219) on Sunday, January 23, 2022, from 12pm to 2pm in the church parlor with services immediately following in the sanctuary. Masks are mandatory per church policy and family request. For those unable to attend the service will be streamed on Facebook https://www.facebook.com/irvingtonpresbyterian and/or YouTube https://www.youtube.com/c/IrvingtonPresbyterianChurch In lieu of flowers, the family is requesting that a donation be made in Eric’s name to any of the following: The Indiana Wind Symphony, Shelby Community Band, and/or the University of Indianapolis Music Department.

The family of Eric Alan Schreibman created this Life Tributes page to make it easy to share your memories.

Send flowers to the Schreibman family.