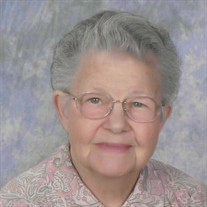 Dorthea Mae Hilgeman Chase, Died November 11, 2021 in Indianapolis at the age of 96. She was preceded in death by her husband, Homer Lloyd Chase; by their son, Dale John Chase; by her parents, Albert and Lillian Mae Brockriede Hilgeman; by her two brothers, Allen Eugene and Ellis Albert Hilgeman; and by her sister, Violet Jeanette Collins. She is survived by her children, Daniel Owen Chase and Sarah Hannah Cesnik; grandson, Darian Chase; great-grandson, Oliver Morris Chase; and her sister, Connie Sue Frick. Dorthea was born in Huntingburg, IN, May 12, 1925. She graduated from Huntingburg High School in 1943, and later worked in the photography studio of Irving Chase. She had an affinity for art and was soon in high demand as a photography colorist. (Color film was not commonly used for another 20 years.) Dorthea married Homer in 1945. After their sons were born, they moved to Bedford, Indiana, where they began a photography business. However, the business didn’t grow fast enough to support their new family. Homer became a sawyer in Bedford’s famous limestone industry. Dorthea continued work as a photo colorist, and also became the bookkeeper for the East Lawrence Water Co. They had a good life in Bedford. Homer was active in Scouting and the American Legion. Dorthea was an officer in the Auxiliary. They were charter members of the Lawrence County Rock Club, enjoying many rockhounding expeditions throughout the Midwest. Dorthea had extensive fossil and mineral collections. She was a charter member of the Lawrence County Art Association and also belonged to the Brown County Art Guild, the Brown County Art Gallery and Indiana Heritage Arts. Dorthea studied with Indiana artists: Al Todd of Bedford, Virginia Anders of Paoli, Fred Rigley of Nashville, Charles Crawford of Bedford, and Maryrose Wampler of Bloomington. Dorthea wrote that she “was also privileged to observe several very good Indiana artists at work.” These included Dwight D. Stienegher and Kay Pool of Nashville, Omar Seamon of Vincennes and Frank Hopper of Indianapolis. In 1985, a few years after her husband Homer died, Dorthea moved to the Indianapolis neighborhood of Irvington to be closer to her daughter Sarah and her son Daniel. She joined the Arts League of Irvington and regularly attended the Indianapolis Opera. Dorthea was a member of Downey Avenue Christian Church, where she enjoyed Sunday School, worship service and volunteering at the church pantry. A Service of Remembrance will be held at Downey Avenue Christian Church, Saturday, December 11, 2021 at 12:00 p.m., with visitation one hour prior. You are invited to bring a nonperishable food item to donate to the church food pantry in Dorthea’s loving memory. Please go to Dorthea's obituary at www.shirleybrothers.com to see photos of Dorthea's life and art.

Dorthea Mae Hilgeman Chase, Died November 11, 2021 in Indianapolis at the age of 96. She was preceded in death by her husband, Homer Lloyd Chase; by their son, Dale John Chase; by her parents, Albert and Lillian Mae Brockriede Hilgeman; by... View Obituary & Service Information

The family of Dorthea Mae Hilgeman Chase created this Life Tributes page to make it easy to share your memories.

Send flowers to the Chase family.