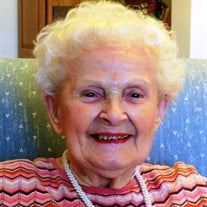 Dorothy A. Schroeder Steuerwald, 100, of Indianapolis, Indiana, passed away June 6, 2021. She was born September 28, 1920 in Indianapolis, Indiana to the late Albert C. and Dorothea Ehrgott Schroeder. Dorothy was a graduate of Arsenal Technical High School, Class of 1938. On May 25, 1944, she married Robert E. Steuerwald while he was home on leave from the U.S. Army. Dorothy was primarily a homemaker throughout her life but while working at Real Silk Company during WWII, she completed a Purdue University War Training course in the Department of Engineering-Science-Management: “Fundamentals of Manufacturing Accounting”. For over 25 years Dorothy was an active member of the “Community Doers”, an Old Bethel United Methodist Church group, which sews and embroiders pillows that are donated to hospitalized children at Community Hospital East. Dorothy was a master seamstress, sewing for her three daughters (including their wedding dresses) as well as many eastside friends. In addition to sewing, Dorothy enjoyed bowling, crocheting, and swimming as hobbies. She was a member of Old Bethel United Methodist Church. Visitation will be Wednesday, July 7, 2021, from 11:00 a.m. until the time of service at 1:00 p.m. at Shirley Brothers Washington Memorial Chapel, 9606 East Washington Street. Dorothy is survived by her daughters, Kathy Hains (Wes), Jane Fouts (Mike) and Robin Stahl (Tom); five grandchildren, Blair, Blaine, Nick, Tim and Allie; and 10 great-grandchildren. Memorial contributions may be made to Old Bethel United Methodist Church.

The family of Dorothy A. Schroeder Steuerwald created this Life Tributes page to make it easy to share your memories.

Send flowers to the Steuerwald family.