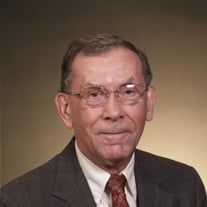 Donald Eugene Hetzler, 82, of Pekin, Indiana (formerly Indianapolis, Indiana), passed away February 25, 2022. He was born May 23, 1939 in Dayton, Ohio to the late M. Eugene and Clarice M. Hetzler. Donald attended high school at Beavercreek in Dayton, Ohio and graduated Class of 1957. He proudly served his country in the U.S. Air Force, 1957-1961. He attended college at Miami University in Oxford, Ohio and graduated Class of 1965. He married Carolyn M. (Bacon) Hetzler on March 30, 1974. He was employed at Bridgestone/Firestone, Inc. and retired January 1, 2002. He was a proud father of four children and loved all of his grandchildren, great-grandchildren and great-great- grandchild. Donald was a longtime member of Geist Christian Church in Indianapolis. After his move to Pekin, he joined Greenville Christian Church. Donald was a devoted Christian and truly loved the Lord. Donald enjoyed going on cruises and traveling with his wife. He always made sure to let people know that he loved his wife and would always love her for eternity. After moving to Pekin, Indiana, he loved the outdoors, working in the garden picking vegetables and especially mowing the grass on the riding lawn mower. He enjoyed taking walks in the park with his son-in-law, David, whom he called his best bud. Visitation will be Thursday, March 3, 2022 from 4:00 p.m. to 8:00 p.m. and family visitation on Friday, March 4, 2022 from 10:00 a.m. until the time of service at 11:00 a.m. All will be at Geist Christion Church, 8550 Mud Creek Road, Indianapolis, IN 46256. Donald is survived by his wife of 48 years, Carolyn M. Hetzler, daughter Christina (David) Hicks, daughter Catherine (Jose) Rivera, son Steven (Katherine) Smith, sister Judy Hudson, twin sisters Janet Withrow and Joyce Hetzler. Donald was preceded in death by his son Gregory Smith, brother-in-law Arthur “Art” Hudson and brother-in-law David “Dave” Withrow. “I see that the Lord is always with me. I will not be shaken, for he is right beside me. No wonder my heart is glad, and my tongue shouts his praises! My body rests in hope. For you will not leave my soul among the dead or allow your Holy One to rot in the grave. You have shown me the way of life, and you will fill me with the joy of your presence. Acts 2: 25-28. Final care and arrangements are entrusted to Shirley Brothers Washington Memorial Chapel.

The family of Donald Eugene Hetzler created this Life Tributes page to make it easy to share your memories.

Send flowers to the Hetzler family.