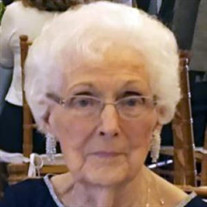 Dolores Charleston, 92, passed away on January 17, 2022. A wife, mother, grandmother, and great-grandmother, she was married for 70 years to Roy Charleston, who preceded her in death in 2021. Born in the middle of the Great Depression in Sullivan, Illinois, Dolores Jardine was the daughter of a Canadian laborer, Thomas, who was working in the U.S., and Stella, of Sullivan. They returned to Trenton, Nova Scotia, where Dolores was raised until she graduated high school, and then moved to Hamilton, Ontario. Dolores married Roy Charleston in 1951. After several years of moving due to Roy’s service in the U.S. Air Force, they settled in Hammond, Indiana, and then permanently in Indianapolis in 1966, where Roy had a long career in the insurance business. Dolores and Roy raised four sons. Dolores began her working career as a switchboard operator for Bell Canada. Following a hiatus to raise her family, she worked for more than 25 years for Kittle’s Furniture Store in Castleton. For many years she was the “voice of Kittle’s” as the telephone operator/receptionist. She retired in 2001. Dolores loved Christmastime and enjoyed spending time with her family, working crossword and jigsaw puzzles, reading and shopping. She often said she wanted to be remembered as “someone who was fun.” And she was fun! Dolores is survived by her four sons, Thomas (Rita), Stephen (Heddy), Jeffrey (Lori) and Gregory (Rodney); four grandchildren, Kelli (James), Kyle, Scott (Lee Anne) and Chad; and eight great-grandchildren. She is also survived by her sister, Linda (Arthur); and two nieces in Ancaster, Ontario. In an abundance of caution, the family will be holding a private family service at this time. A celebration of life for Dolores will be held later this summer. In lieu of flowers, the family requests that donations be made to the Michael J. Fox Foundation for Parkinson’s Research, Grand Central Station, P.O. Box 4777, New York, NY 10163-4777. Final arrangements are entrusted to Shirley Brothers Fishers-Castleton Chapel.

Dolores Charleston, 92, passed away on January 17, 2022. A wife, mother, grandmother, and great-grandmother, she was married for 70 years to Roy Charleston, who preceded her in death in 2021. Born in the middle of the Great Depression in Sullivan,... View Obituary & Service Information

The family of Dolores Charleston created this Life Tributes page to make it easy to share your memories.

Send flowers to the Charleston family.