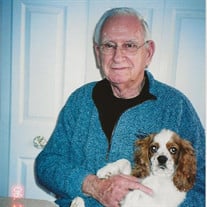 David H. McConnell, 94, of Fishers, IN, went home to be with his heavenly Father on December 31, 2020. He was born April 8, 1926 in Indianapolis to the late Tyrell McConnell and Janice Thompson. David graduated from Shortridge high school and joined the U.S. Navy. He proudly served his country during WWII and was stationed on the island of Saipan as an LCM operator. David met and married the love of his life, Rena F. Burton. It was a second marriage for both, and they celebrated 50 years of marriage before she preceded him in death on May 23, 2013. David was an award-winning salesman of fine carpets at L.S. Ayres & Co. for 43 years. He loved the sports of hockey, which he eagerly watched, and golf, which he avidly played until 2017. David was a man of honesty and integrity, who dearly loved his family and his dog BJ. He will be deeply missed by his family, friends, and neighbors. Visitation will be Friday, January 8, 2021, from 6:00 p.m. until 8:00 p.m. at Shirley Brothers Fishers-Castleton Chapel, 9900 Allisonville Rd. Graveside services will be held Saturday at 11:00 a.m. at Oaklawn Memorial Gardens, 9700 Allisonville Rd. David is survived by his daughter, Cheryl D. Pierson; grandchildren, Benjamin R. Sayre, Joshua A. Sayre, Ryan McConnell (Justyn) and Lisa Dubose (James); great-grandson, Chandler Dubose; great-granddaughter, Sara McConnell; brother, Chris Johnson (Lois); and son-in-law, A. William Sayre. A son, Kevin McConnell; and a daughter, Shawn Sayre, preceded him in death. Memorial contributions may be made in David’s honor may be made to the Hamilton County Humane Society – Indiana’s only “no-kill” shelter at https://www.hamiltonhumane.com/how-to-help/donate/individual-giving.

David H. McConnell, 94, of Fishers, IN, went home to be with his heavenly Father on December 31, 2020. He was born April 8, 1926 in Indianapolis to the late Tyrell McConnell and Janice Thompson. David graduated from Shortridge high school... View Obituary & Service Information

The family of David H. McConnell created this Life Tributes page to make it easy to share your memories.

Send flowers to the McConnell family.