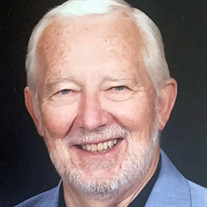 David Brisco Harrison, 87, of Indianapolis, formerly of Stow, OH, died peacefully January 17, 2022 at Westminster Village North. He was born October 6, 1934, in Indianapolis, the only child of the late Harold and Alice Harrison. He was a loving son, husband, father, and grandfather. His wife of 65 years, Jean, preceded him in death and he leaves his three children, Stephen (Carol), Michael (Alanna) and Lisa (Orren) Bethel; six grandchildren, Bradley, Danielle, Jeffery, Elizabeth, Andrew (Kayla) Bethel and Emily Bethel; brother-in-law, Robert (Margo) Hartmann, Jr.; two nieces; cousins and many friends. Mr. Harrison grew up in Indianapolis before moving to Cincinnati where he met his wife, Jean. He graduated from Ohio University in 1956 with a degree in journalism and went to work for the Associated Press. In 1968, he took a position in public relations with Goodyear Tire and Rubber in Akron, Ohio, where he would stay until his retirement in 1994. While with Goodyear, he traveled the world for business including trips to Alaska during the construction of the Alaskan pipeline, Europe, and South America. But what he enjoyed most was the month of May when he was Goodyear’s PR representative at the Indy 500. The responsibility he loved the most was being in Victory Lane with a Goodyear hat for the winner. Mr. Harrison could tell stories for hours about his years at the Speedway. After moving back to Indianapolis in 2006, he took a part-time job at the Speedway Hall of Fame and Museum where he entertained visitors with his knowledge and humor. Mr. Harrison was a loving father who would travel any distance to see his children and grandchildren or help them in any way possible. He was a Boy Scout Scoutmaster, a baseball and softball coach, a swimming official, and a church youth counselor, among other things. He loved to take on projects of any sort – construction, landscaping, car repairs on his kids’ VW Bug – and in his later years developed a love for genealogy, traveling around the country to research his ancestors. The Harrisons loved to travel and took trips to foreign destinations as well as all over the United States. The last trip Mr. Harrison took was a week-long train trip this past fall to the West Coast and back with his good friend Pete. Visitation will be Friday, January 21, 2022 from 4:00 p.m. until the time of service at 6:00 p.m. at Shirley Brothers Fishers-Castleton Chapel, 9900 Allisonville Road, Fishers, IN 46038. Memorial contributions may be made to the American Cancer Society.

David Brisco Harrison, 87, of Indianapolis, formerly of Stow, OH, died peacefully January 17, 2022 at Westminster Village North. He was born October 6, 1934, in Indianapolis, the only child of the late Harold and Alice Harrison. He was a loving... View Obituary & Service Information

The family of David Brisco Harrison created this Life Tributes page to make it easy to share your memories.

Send flowers to the Harrison family.