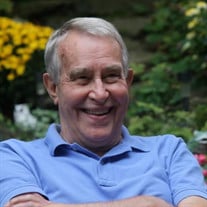 Dale R. Perry, 88, passed away in his home on April 15, 2021 with his family by his side. Dale was born on September 27, 1932 on a small farm west of Columbus, Indiana. He was the youngest of Margaret and Grover Perry’s 11 children. He graduated from Hope High School (1950) and Ball State University (BS ’59, MS ‘65) and was a U.S. Navy veteran serving on the USS Bennington in the Mediterranean Sea from 1951 to 1954. He met Joan deJung and they were married in 1956. Dale was a carpenter early in life and built many homes including his own and worked on many of his brothers’ homes. He taught 4th, 5th, and 6th grades at Brook Park Elementary in Lawrence for 32 years. Anyone that knew Dale, knows he loved canoeing and white whitewater rafting more than just about anything besides his family and friends. Dale and Joan built a cabin in Robbinsville, NC just so they could be closer to the whitewater rivers. He was a lifelong member of the Hoosier Canoe Club. He shared so many adventures and loved being with his family and friends on the river. Dale was a big basketball fan, enjoyed the outdoors, hiking, camping, biking, reading, and storytelling. One of his favorite things to do was to break his grandkids out of daycare and school and take them on all kinds of adventures. A Memorial Visitation will be held Wednesday, April 21, 2021, from 4:00 p.m. until 7:00 p.m. at Shirley Brothers Fishers-Castleton Chapel, 9900 Allisonville Road. Dale is survived by his loving family: Joan Perry wife of 63 years, sons Phil (Carol), Alan (Shelbi), daughter Amy Perry Shouts (Corey), his five grandchildren Kyle Perry (Braydee Euliss), Sean Perry (Alice Sommerville), Ashley Perry, Hannah Perry, Hayden Shouts; and Dale’s sister Josephine Robertson. In lieu of flowers, the family requests you consider making a memorial contribution to the Kathryn Stewart Book Fund c/o Karen Mize, 431 Scott Street, Hope, Indiana 47246.

The family of Dale R. Perry created this Life Tributes page to make it easy to share your memories.

Send flowers to the Perry family.