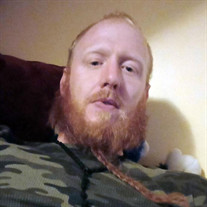 Christopher Allan McCallister, 39, of Indianapolis, passed away February 19, 2022. He was born April 21, 1982 to Kevin R. and Jackie McCallister. Chris was a graduate of Arsenal Technical High School. He was a professional welder and fabricator... View Obituary & Service Information

The family of Christopher Allan McCallister created this Life Tributes page to make it easy to share your memories.

Send flowers to the McCallister family.