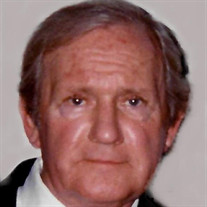 Not sure what to send?

91, of Fishers, IN, passed away peacefully January 14, 2022. He was born June 22, 1930 in Evansville, IN, to the late Ferdinand and Sallie (Bell) Winternheimer. Charles was a 1948 graduate of Central High School and attended Indiana University. He proudly served his country in the U.S. Navy during the Korean War and married Leah Neel Overfield in 1958. Charles was a draftsman by trade and was employed with International Steel for 9 years, ALCOA for 3 years, Babcock and Wilcox for 13 years, and finally G.A.F. for 14 years, retiring in 1995. Charles enjoyed reading historical books, traveling, spending time with family, especially his granddaughter, Lauren, and his beloved Sheepdog, Dudley. Visitation will be Wednesday, January 19, 2022 from 10:00 a.m. until the time of service at 12 noon at Shirley Brothers Fishers-Castleton Chapel, 9900 Allisonville Road. For those unable to attend please click on the following link to view a livestream of the service. https://client.tribucast.com/tcid/2885080942 Charles is survived by his children, Scott Winternheimer, Karen Green (Scott) and Stuart Winternheimer (Karen); grandchildren, Grant Winternheimer, Jessica McQueary (Terry), Brayton Green, Kendall Green, Lauren Green, Sarah Winternheimer, Susie Winternheimer and Tom Winternheimer; four great-grandchildren and several nieces and nephews. Also surviving are two cousins, Judy (Winternheimer) Weishaar (Paul) and Carol (Winternheimer) Grimm, both of Evansville, IN. He was preceded in death by his wife of 45 years, Leah Winternheimer; and a sister, Norma Jean Miller. In lieu of flowers, memorial contributions may be made to Downs Syndrome Indiana online at www.dsindiana.org.

91, of Fishers, IN, passed away peacefully January 14, 2022. He was born June 22, 1930 in Evansville, IN, to the late Ferdinand and Sallie (Bell) Winternheimer. Charles was a 1948 graduate of Central High School and attended Indiana University.... View Obituary & Service Information

The family of Charles W. Winternheimer created this Life Tributes page to make it easy to share your memories.

Send flowers to the Winternheimer family.