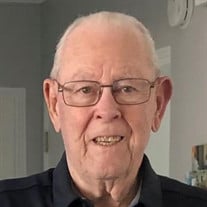 Charles D. Phillips, 87, of Indianapolis, passed away Tuesday, April 12, 2022. He was born June 12, 1934 in Thornton, Kentucky to the late Curtis and Carrie (Morgan) Phillips. Charles proudly served his country in the U.S. Army from 1955-1957. He worked in production manufacturing at US Rubber (Uniroyal) for 28 years, then with Allison Transmission for 14 years, retiring in 1995. Charles was a hard worker and also worked part-time as a barber during the 60’s and 70’s. He was a member of Power of Prayer Community Church and a member of Englewood Masonic Lodge No. 715 F. & A.M. Friends and family are invited to gather for a visitation beginning at 11:00 a.m. on Monday, April 18, 2022, with a Masonic and traditional Funeral Service following at 2:00 p.m. at Shirley Brothers Washington Memorial Chapel, 9606 East Washington Street, Indianapolis, IN 46229. Charles is survived by his loving daughter, Sherri Ann Puckett; his son-in-law/right hand man, Larry Puckett; son, Charles D. Phillips, Jr.; as well as many nieces, nephews, and several who adopted him as their grandpa. He was preceded in death by his brothers, James, Tom. Gordon, Franklin (Delano) and Johnnie Phillips. Charles will be forever missed and will live on in the hearts and stories of family and friends. The family would like to acknowledge and thank Heartland Hospice and his wonderful nurses, Eric and Laverne; and social workers, Fatima and Vey for their care and compassion. We are forever grateful for the support of his/our family and friends. In lieu of flowers, memorial contributions may be made to March of Dimes, Louisville, Kentucky https://www.marchofdimes.org/

The family of Charles D. Phillips created this Life Tributes page to make it easy to share your memories.

Send flowers to the Phillips family.