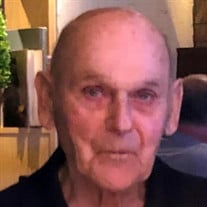 Charles Decker, 87, of Indianapolis, passed away peacefully at his home on Wednesday, January 27, 2021. He was born July 5, 1933 to Charles and Charlotte (Matthews) Decker in Waymart, Pennsylvania. “Charlie” graduated from Waymart High School in 1951. He is considered to be one of the 8 greatest basketball players to ever come out of Wayne County. He led the Wayne County Conference twice in scoring. Charlie also has the highest point total in county history, at the time, with 1634 points. He set the single game scoring mark of 45 points versus Northern Wayne. He averaged 24.8 points his senior year and was selected to Second Team All-State. He led Waymart to the Wayne County Conference Championships in both his Junior and Senior years with a 16-0 record. Additionally, he was named to the Associated Press 1951 Little All-Star Pennsylvania Scholastic Team. Charlie was also a star baseball player. He tossed two no-hitters pitching for Waymart. He was drafted out of high school to play professionally for the Chicago Cubs and the Pittsburgh Pirates. He chose to pursue his college education rather than signing a professional contract. He also received 3 varsity letters playing on the Waymart High School Soccer Team. Charlie was inducted into the Wayne County Hall of Fame in 1995. Charlie played basketball locally after high school at Keystone Junior College and amateur basketball for Lakewood and the Honesdale Ramblers in the Tri-County League. During this time he averaged 39.9 points per game and scored a single game high of 58. He also set a record for the Brooks Invitational Tournament at the Scranton YMCA with 48 in one game and 125 in three games. He then served his country in the U.S. Army for 2 years. He was stationed at Ft. Benning, Georgia assigned to the Third Army Infantry Division. Charlie was a star basketball player on the Ft. Benning and Ft. Rucker base teams being selected to the All-Post team both years. He earned the National Defense Service Medal and the Good Conduct Medal during his time there. He separated from service with an honorable discharge. Charlie then took his talents to McNeese State University in Lake Charles, Louisiana. There he was a sport standout in basketball and baseball. He was an All-Conference selection in both sports in the 1950s for the Cowboys. In basketball he was a starter on the Cowboys 1956 NAIA National Championship team that went 33-3 his senior year. They defeated Texas Southern 60-55 in Kansas City, MO. In baseball, he was a two time all league pick and the Gulf Coast States Player of the Year in 1956 when he led the Cowboys to the Conference title. Twice he was named the team Most Valuable Player. Charlie once pitched both games of a doubleheader wining both! Charlie was inducted into the McNeese Hall of Fame in 1984. After college, Charlie played in 8 National Championship Tournaments in the AAU Basketball Circuit. Three times with the McDonald Scots in Lake Charles, four times with the Akron Goodyear Wingfoots of the National Industrial Basketball League and once with the Burger Chefs of Indianapolis. He won two National AAU titles while playing with the Goodyear Wingfoots. While with Goodyear, he played many exhibition games all over the world including Mexico, Turkey, Iraq, Iran, France and Afghanistan. Charlie competed at the 1960 Olympic Team Trials in Denver, Colorado with the Scots and the Wingfoots. Some of the notable players he competed against were; Bobby Plump, Bob Boozer, John Havlicek, Jerry Lucas, Bob Knight, Oscar Robertson, Terry Dischinger, Jerry West, Walt Bellamy, Adrian Smith and Zelmo Beatty. After his playing days Charlie coached the Indianapolis team in the AAU League. After working for the Goodyear Tire and Rubber Company as a special assistant, Charlie started his career in sales with Doubleday Book Company. He settled down in Indianapolis, Indiana with his family. He retired from Doubleday in 1990 and then worked a variety of jobs including painting houses, golf course maintenance, and flower delivery driver. He then became an avid golfer twice winning the Sarah Shank Men’s Club Championship in Indianapolis. He achieved a low handicap of 2 at the pinnacle of his golfing career. His group of golf buddies were very near and dear to him through the years. He often took golfing trips with them. Charlie was a staunch Indiana University fan. This was mainly due to his relationship with Coach Bob Knight. They played basketball together back in the 1960’s while Charlie was in Ohio. He often attended games and practices of the Hoosiers. He was also a huge Indianapolis Colts fan. They held season tickets from the inaugural season and then 14 years after that. Charlie was preceded in death by his loving wife of 40 years, Mary Cecilia Decker. Charlie is survived by his five children, David (Maria) Decker, Paul Decker, Dana (Michael) Cavosie, Jennifer (Jason) Hedge and Katherine Decker. He also had 10 grandchildren; and four great-grandchildren. Our father was a kind, gentle and humble man. “He was loved by many and will be missed by all.” Visitation will be held Thursday, February 11, 2021 from 5:00 p.m. until the time of service at 7:00 p.m. at Shirley Brothers Irving Hill Chapel, 5377 East Washington Street.

Charles Decker, 87, of Indianapolis, passed away peacefully at his home on Wednesday, January 27, 2021. He was born July 5, 1933 to Charles and Charlotte (Matthews) Decker in Waymart, Pennsylvania. &#8220;Charlie&#8221; graduated from Waymart... View Obituary & Service Information

The family of Charles "Charlie" Decker created this Life Tributes page to make it easy to share your memories.

Charles Decker,
87, of Indianapolis, passed away peacefully at...

Send flowers to the Decker family.