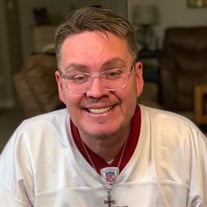 39, of Indianapolis, passed away December 25, 2020. He was born May 16, 1981 in Honduras. He was later adopted by Steven and Donna (Kasparek) McRobbie. Bryan married Michelle Blahay, September 18, 2004. Bryan enjoyed spending time with people, lived life to the fullest and gave to anyone in need. He was an avid Washington Redskins fan and loved food, music, traveling and playing poker. Bryan was a member of St. Louis de Montfort Catholic Church, Fishers American Legion #470 and Knights of Columbus. Bryan is survived by his loving wife, Michelle K. Blahay; parents, Steven and Donna McRobbie; sisters, Laurie-Ann Williams (Gilbert), Karen Hawkins (Howard) and Lisa Nelson (Michael); brother, Joseph McRobbie; several nieces and nephews; and 4 cats, Blake, Brie, Bella and Midnight. In lieu of flowers, the family asks that a donation be made to the Memorial Plaza of the Humane Society for Hamilton County's new, state-of-the-art facility which offers a beautiful canvas for you to honor the life of someone special with an engraved brick. Whether it's a gift to honor the living, or a way to honor those passed, this is a lasting way to become a part of the brighter future we're building for the animals who need us most. Final care and arrangements are entrusted to Shirley Brothers Fishers-Castleton Chapel, 9900 Allisonville Road, Fishers, Indiana 46038.

39, of Indianapolis, passed away December 25, 2020. He was born May 16, 1981 in Honduras. He was later adopted by Steven and Donna (Kasparek) McRobbie. Bryan married Michelle Blahay, September 18, 2004. Bryan enjoyed spending time with... View Obituary & Service Information

The family of Bryan Matthew McRobbie created this Life Tributes page to make it easy to share your memories.

Send flowers to the McRobbie family.