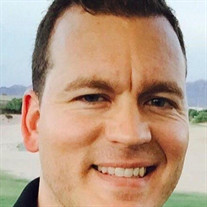 Brian A. Laesch, 41, of Chicago, IL, passed away September 11, 2021. He was born September 10, 1980 in Bloomington, IL, to Mark A. and Kathryn Ball Laesch. Brian was a 1999 graduate of Normal Community West High School. He received his Bachelor’s Degree in Broadcasting and a Master’s Degree in Business from Arizona State University where he was a member of Sigma Nu Fraternity and a Student Senator in ASU Student Government. Brian also coordinated Nuru International “Be Hope to Her” events to raise funds and awareness to build water wells in Kuria, Kenya. Brian began his career as Vault Manager/Production Assistant at New Wave Entertainment, and then Post Production Assistant at New Line Cinema. He started his consulting career as Senior Consultant for 360 Cloud Solutions, moved on as a Primary Consultant for Oracle/NetSuite and then a Senior Consultant for Deloitte Digital. He started his own consulting firm, Laesch Consulting in 2020 and was the President of Golfstat. Brian had fierce determination, was an excellent leader and team player. He was always willing to go the extra mile and take on additional tasks. He was an Ambassador for the ALS Association Greater Chicago Chapter, helping to raise funds and awareness for ALS. Brian auditioned for and recently shot a TV segment in Chicago for the show, The Shining Girls. Visitation will be Wednesday, September 22, 2021 from 4:00 p.m. until 7:00 p.m. at Shirley Brothers Fishers-Castleton Chapel, 9900 Allisonville Road, Fishers. Funeral services will be Thursday at 11:00 a.m. at Tabernacle Presbyterian Church, 418 E. 34th Street, Indianapolis. A Celebration of Life is being planned at a later date in Scottsdale, Arizona. Brian is survived by his mother, Kathryn Ball Laesch; brother, Jordan I. Laesch; sister, Kelsey Laesch Pease (Thomas); his fiancée, Devy Irmawati; and grandmother, Patricia Ann Ball. Brian’s father, Mark A. Laesch, preceded him in death. Memorial contributions are suggested to the Les Turner ALS Foundation, 5550 W. Touhy Ave., Skokie, IL 60077 and/or ALS Association Greater Chicago Chapter, 939 W. Randolph St., Ste. 2W, Chicago, IL 60607.

The family of Brian A. Laesch created this Life Tributes page to make it easy to share your memories.

Send flowers to the Laesch family.