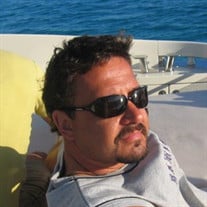 Bradley Joseph “Brad” Barnes, 59, of Indianapolis, passed away April 14, 2021. He was born September 13, 1961 in Hammond, IN, to Ronald H. and Carmen Nitch Barnes. Brad was a 1979 graduate of Munster High School and in 1983 received his Bachelor’s Degree from Indiana University, where he was a member of Sigma Chi Fraternity. Brad began his career with Yancey Marketing in Indianapolis, followed by a move to Atlanta where he started Sundance Marketing, before returning to Indianapolis. He was an avid fan of all professional sports teams in Chicago, but none more so than the Indiana Hoosiers basketball and football teams. Brad was also an author of children’s books and an artist, most recently in mosaics. A Memorial Mass of Christian Burial will be held Friday, April 23, 2021 at 10:00 a.m. at St. Thomas More Catholic Church, 8501 Calumet Ave., Munster, Indiana, with visitation beginning at 9:30 a.m.. Brad is survived by his mother, Carmen Nitch Barnes; and sister, Christine A. Zemer (Richard) and 2 nieces. He was preceded in death by his father, Ronald H. Barnes; and brother, Jeffrey W. Barnes. Memorial contributions may be made in memory of Bradley to the Rhythm! Discovery Center, 110 W. Washington St., Suite A, Indianapolis, IN 46204. Final arrangements and care are entrusted to Shirley Brothers Fishers-Castleton Chapel.

The family of Bradley Joseph "Brad" Barnes created this Life Tributes page to make it easy to share your memories.

Send flowers to the Barnes family.