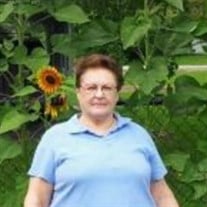 Barbara Adoms Purvis, 73, Indianapolis, IN, passed away peacefully on Saturday, February 13, 2021 at the Richard Roudebush VA Hospital located in Indianapolis, IN. Barbara was born Wednesday, February 11,1948 in Grand Forks, North Dakota to Wanda Clarice Fail and Floyd Wilford Hendrickson. Barbara spent her formative years growing up in Los Angeles, Ca. where she started her first job at age 15 working as an assembler for an Antennae Manufacturing Company. Even at the age of 15, working at her first job, Barbara always championed the cause of working to your abilities and not taking no for an answer. This always allowed her to be the very best that she could be and she was soon offered an opportunity to work in a field that soon became her forte, financial analysis and accounting. Barbara’s work ethic, calm demeanor and intellect always impressed her bosses and as a result, she was given opportunities that were usually reserved for men at that time (the early 1960’s) in America. One of these job offers was working in the Accounting Department for Prudential Insurance Company in Los Angeles. She soon developed a passion not only for her career but she was developing a great and lasting relationship with God that she nurtured through the rest of her life. Barbara always impressed everyone who knew her as being “the most Spiritual Person they have ever known”, this fit in perfectly with her nurturing and caring personality. Barb was selfless and always looked after everyone else before herself, which is a perfect trait for what Barb was yet to do and accomplish. Barbara had a saying that “God was always with us and everything happens for a reason”, in short, there was no such thing as coincidence. Barbara impressed her family and her younger siblings once again by working full time and attending school at night, eventually graduating from the Ronald Reagan Governor Center for Adult learning in 1967. Being the oldest of 5 siblings, Barbara finally did something that she always wanted to do, joined the United States Army. Barbara entered Army in 1976 in Los Angeles, California as an Army Military Accountant. Barbara was never a person to be outdone so she worked hard and was one of the first women to receive an invitation to and graduate from the Basic by Airborne course in 1976. Barbara then earned the reputation a real “Trailblazer” for women by becoming the first woman to graduate from the Army Jumpmaster Course in 1978. She used these credentials well by completing a rotational/assignment as one of the first 3 women to be accepted to and complete an assignment to the Special Forces. While she was assigned to the 5th SF Group located at Ft. Bragg, she continued this path in the US Army through her honorable discharge in 1986. Prior to leaving the Army, Barbara married the love of her life Dr. Daniel Purvis in Germany who was serving in the Army Medical Core there as well. Barbara and Dan, continued a magical journey of their own. After departing Germany, they moved to Louisiana where Barbara decided to transition from the Army and go back to civilian life by joining the Department of Defense as a civilian GS. In 1986, Barbara accepted a promotion and transferred to Indianapolis where she worked out of Ft. Ben Harrison as an Accounting specialist for DFAS. Also, lest we forget, Barbara managed to go to college and earn her Bachelors, Masters and earned credits toward her further graduate studies. From that point forward, Barbara got to enjoy her hobbies with her husband Dr. Dan such as Motorcycle Riding, quilting and teaching others to shoot (and yes, Barbara got to fulfil another dream by going to Sturgis with Dan). Barbara helped to establish one of the first Indiana chapters of the “Well Armed Women” in Indianapolis where she used her skills and passion to become a Range Master and Certified instructor to train others in the same skills that she has loved all those many years. Then, very sadly on February 13, 2021, Barbara faced her toughest battle of all and lost. This was her battle with Interstitial Lung Disease (ILD). Barbara will be forever in the hearts that love her, which is to never die. She leaves behind her husband Dr. Daniel Purvis; her sister, Nancy Segroth; brothers, Bobby Hendricks, Lenny Dahl, Richard Dahl and Ronald Dahl. Also her sisters- in-law, MaryAnne Sullivan and Karen Purvis; brother- in-law, George Purvis; and numerous nieces and nephews. “ TO LIVE IN THE HEARTS OF THOSE THAT LOVE YOU IS TO NEVER DIE”

The family of Barbara Adoms Purvis created this Life Tributes page to make it easy to share your memories.

Send flowers to the Purvis family.