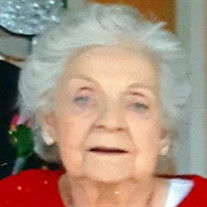 Alice Marie (Stafford) McGill, 87, of Indianapolis, passed away December 21, 2020, The loving wife, mother, and grandmother, was born June 9, 1933, in Meridian Mississippi, to parents, Claude Stafford and Ethel (McGraw) Stafford. On June 22, 1951, Alice married her husband of 64 years, Stanley Gordon McGill in Denver, Colorado. Stanley preceded her in death February 8, 2016, at the age of 85. She was also preceded in death by her son, Robert Alan McGill; as well as her brother, Claude Stafford II; and sisters, Betty, Jane and Doris. Alice’s greatest joys in life included talking for hours with her sisters and brothers, playing bridge with friends, and southern cooking for her family. Alice is survived by her sons, Steven Stafford McGill (Lisa Wagner) of Carmel, IN; David Shawn McGill (Gia Berns) of Carmel, IN; grandsons, Samuel McGill and Nicholas McGill; and step-granddaughters, Samantha Hammer and Kassidy Hammer. A private graveside service will be held on December 24, 2020.

The family of Alice Marie McGill created this Life Tributes page to make it easy to share your memories.

Send flowers to the McGill family.