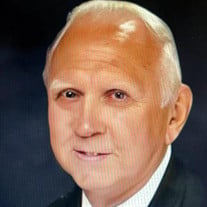 Albert Williams, Jr. Age 76, passed away on February 22, 2022. Albert was born on October 5, 1945 to Jewel and Albert Williams. He spent his childhood in Indianapolis and attended Warren Central High School. Albert married Sandra Williams on November 20, 1964. Albert was a 30-year resident of Greenfield, Indiana. He has lived in Georgia for the last 10 years. Albert worked for years with Chrysler. His dedicated work ethic meant that he took odd jobs to ensure his family never went without. He worked for over 20 years at Best Lock. Albert helped design tools and implements to better help the processing system. Albert had a strong artistic ability. One of his favorite things to do was fold intricate airplanes for his grandson. Albert’s accomplishments are eclipsed by his never-ending love for his family. He never met a stranger that he wouldn’t brag about his wife, children, grandchildren, or sister. His strongest desire was that his children and family follow his legacy of faith. Albert spent much of his free time serving his church in any way he could be used. His love for Jesus came first, but his love for his wife, Sandy was a very close second. Albert delighted in animals. He loved birds and fed them daily. Cats were always one of his favorite animals. Albert traveled quite a bit, following Sandy anywhere she wanted to go. He enjoyed playing family games and he was unparalleled at Pictionary. Albert was an avid Chicago Cubs fan and was elated at their World Series win. Albert is survived by his daughter, Diana; and sons, James and Chris; his son-in-law, Toby; and daughters-in-law, Rachel and Heidi. Albert had eight grandchildren; and 11 great-grandchildren and counting. He is also survived by his sister, Lavonne Williams Fedynich. Albert was preceded in death, by just five months, his beloved wife, Sandra Williams; and his parents, Jewel and Albert Williams. Albert is whole and complete with his Savior, and once again with the love of his life, Sandy. Viewing will be held Saturday, March 5, 2022 at 11:00 a.m. at Cornerstone Baptist Church, 10701 E. 56th St. Services to follow at 12 noon. Final care and arrangements are entrusted to Shirley Brothers Washington Memorial Chapel.

The family of Albert Williams, Jr. created this Life Tributes page to make it easy to share your memories.