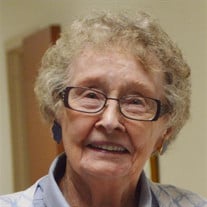 Agnes Theresa Hopkins, 95, of Indianapolis, passed away January 18, 2021. She was a longtime resident of Saint Augustine Home and a former member of Saint Pius X Catholic Church. She began her association with St. Augustine as a volunteer for many years, eventually becoming a resident, remaining very active in serving the community. Terry was born in Liverpool, England on July 8, 1925, to the late Agnes and Stephen Browne. During World War II, she was a volunteer to the English Land Army for the duration of the war; and, she and her family endured two bomb attacks that destroyed their homes during the bliltzkrieg. She married Richard T. Hopkins, a U.S. Army soldier, in 1945, and later emigrated to America where she became an enthusiastic naturalized citizen. She went on to raise six children, and during her lifetime was a dedicated wife, mother, Cub Scout Den Mother, school employee, bereavement counselor, hospice volunteer and good-natured woman to all who met her. In her later years, she was a role model for anyone contemplating how to deal with the aging process. She accomplished this with grace, good humor, wise counseling to younger people, a sense of purpose in helping others, and a revered faith in God. She was an inspiration in how she endured a challenging life from her youth to her later years. Terry was preceded in death by her parents; two sisters; three brothers; her husband, Rick; and her son, Craig. She is survived by her sons, Jerry Hopkins (Diane), Brian Hopkins, Kevin Hopkins (Sandy); daughters, Beverly Leitz and Jan Hopkins; four grandchildren; and three great-grandchildren. To her last days, she remained grateful to the entire staff of St. Augustine Home, the Little Sisters of the Poor, and her many other friends. She asked that in lieu of flowers, donations be made to St. Augustine Home in her honor. No funeral services are planned at this time. Final care and arrangements are entrusted to Shirley Brothers Washington Memorial Chapel.

Agnes Theresa Hopkins, 95, of Indianapolis, passed away January 18, 2021. She was a longtime resident of Saint Augustine Home and a former member of Saint Pius X Catholic Church. She began her association with St. Augustine as a volunteer... View Obituary & Service Information

The family of Agnes Theresa "Terry" Hopkins created this Life Tributes page to make it easy to share your memories.

Send flowers to the Hopkins family.